There was big news in the browser world this month, as Google's Chrome browser eclipsed Firefox's market share, making is the #2 most popular browser in the world. Google's goals with regard to Chrome have always been clear. As Peter Kasting, a founding member of the Chrome team at Google, puts it:

While I don't doubt this as the primary motivation for building the browser, there are clearly some tangential opportunities that Google is exploring. For instance, there is a fascinating theory that the Googlebot (the crawler responsible for maintaining Google's search index) is in fact running Chrome under the hood in order to index JavaScript and other dynamic content.

There is also the Chrome Web Store, which has emerged in over the last 12 months as a way for Chrome users to browser through a (very) lightly curated selection of web "apps" and install them to Chrome - an app store in the footsteps of Apple, for the browser & web. The store appears to have about 65 million users (though it's unclear what counts as a user) and about 18,000 apps available.

I have some theories about Google's strategic goals of the Chrome store (in all likelihood it's to support Chrome OS, but it might not be. What else, say you? To drive Chrome adoption? To turn a profit by pushing Google Checkout? To simply "advance the web"?) but ultimately we can make the safe assumption that the success of the Chrome Web Store is predicated on people installing and using Chrome apps. More app installs = execution of strategy (whatever it is).

So how is the store doing? With 65 million users, based on Chrome's \~25% market share and the 2bn worldwide internet users, about 13% of Chrome users have made use of the store. Given how the store works today I'm actually surprised it's that high, but I'm guessing that iPhone users' adoption of the Apple app store is close to 100% and that the Google team is not satisfying mucking around at 13% adoption.

Let's see if we can help them out.

But first, it's worth noting that there are really easy ways to drive Chrome app adoption: aggressively promote the store from within Chrome itself, show app results in Google search results, and in general promote the store across Google properties. However Google has wisely resisted such cheap promotion in the past (edit: maybe not), so this discussion is focused on how the Chrome store can succeed on its own merits, not on Google marketing it to a captive audience.

So let's try and divine what exactly a "Chrome App" is, versus a "normal" web app that's just run through the browser. I'll go ahead and install the ever-present Angry Birds (which over 1m Chrome users have also done). It's easy enough through the Chrome Store, and here's the end result: 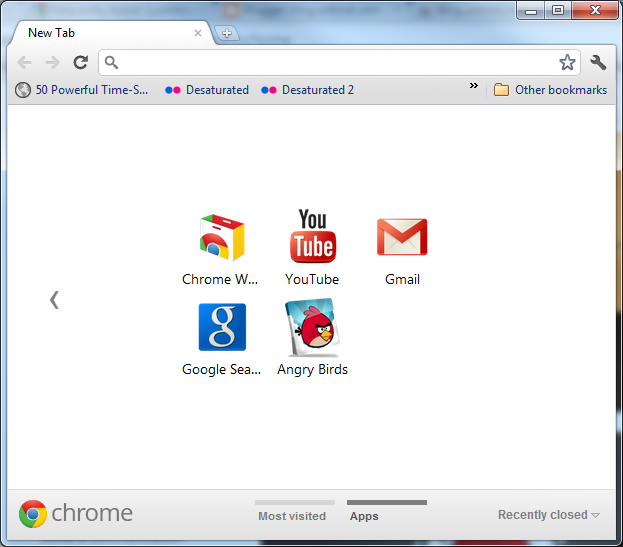 Voilà! I now have an Angry Birds icon available whenever I open a new Chrome tab.

When I click it, Chrome navigates to http://chrome.angrybirds.com where I can, surprise, surprise, play Angry Birds. It's worth noting that I can just as easily hit this URL without the Web App installed. In fact, I can even hit in IE and it works fine.

So what's the big deal? Surely there is something to Chrome Web Apps other than a handy link on new browser tabs, right? Well, there is. The difference is near the bottom of the screen, and here's what it says when I have the app installed:

Ah-ha! It's installing the offline version. And indeed, without the app installed, I see this instead:

In fact, it's the same message I see in IE:

Hmmm, well that seems...minor. The handy shortcut is fine and good, and apparently the app also gets access to some local storage, but if that's it then the store may be in for a lot of comments like this, from a Google's "Why You Should Create an App" video:

But Angry Birds is just one example - there must be more, right? Let's hear from Google directly, which will surely convince us that the app store is more than a directory of useful web sites.

Here is how Google describes the benefits of a web app, buried deep in an FAQ:

Why would someone install a web app instead of just using a bookmark or typing in a URL? Installing an app ensures it is launchable from the New Tab Page via the Chrome apps launcher. Installing an app also allows you to grant it privileges such as unlimited local storage and background pages.

That's pretty much the entirety of Google's explanation of why Chrome apps exist. Even the way the question is posed makes the apps sound ridiculous.

To encourage app installs, the benefits of doing so need to be obvious and tangible. Right now they are neither. There are in fact real benefits to the app approach, but Google has seemingly little interest in conveying them to end users. As a result, users view apps as glorified bookmarks.

The situation for developers is no better. The developer portal describes the problem apps solve as "requests for permission are annoying" (really, this is what it says). Again, benefits are not spelled out and developers are left guessing as to why, exactly, they would make an app.

Ask an iOS developer what the benefits of a native app are (even shimmed HTML5 apps made with technologies like PhoneGap). They'll say:

In fact, Chrome Apps offer many of the same benefits but they are poorly explained to both users and developers. Paid apps, integrated with Google Wallet, are available (albeit poorly adopted - this was literally the only example I could find after 20 minutes of searching), as is an in-app payments API.

Google just needs to explain this better. And it's not hard. Here's 10 minutes of effort in Balsamiq: 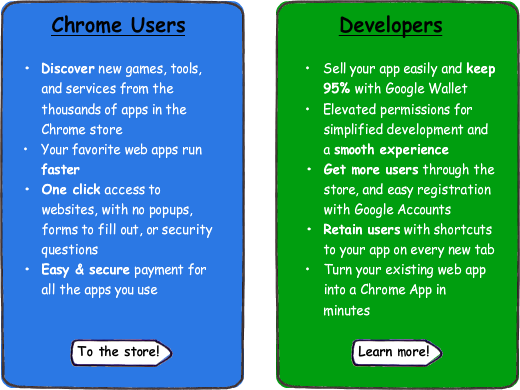 But even existing apps are not taking advantage of these benefits. For instance, Prezi is a fairly popular productivity app in the store, with about 50,000 users. As far as I can tell the app is literally a glorified bookmark, just linking to Prezi.com. I still have to sign up (create a username and password) for Prezi.com, and if I want to purchase a paid version I get a form that looks like this: 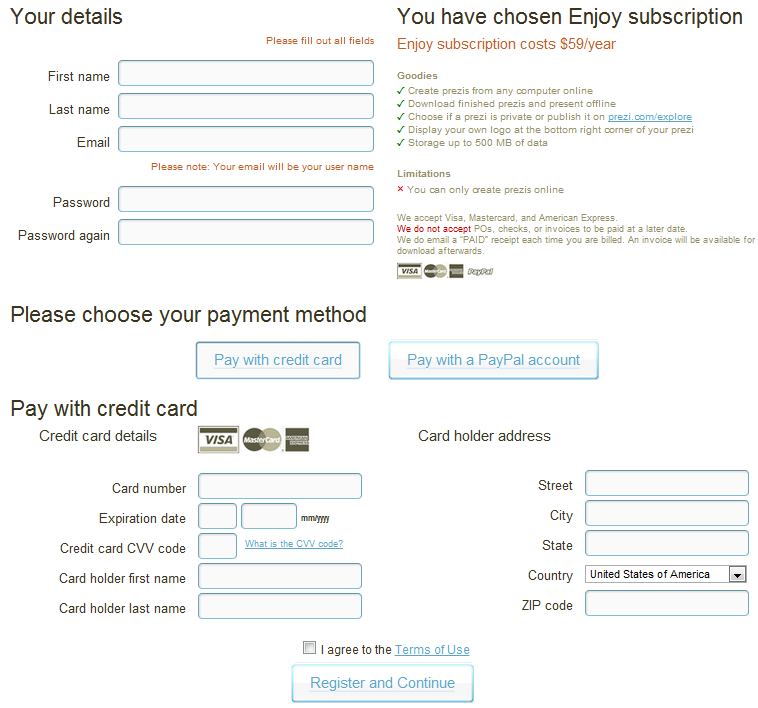 Wowza! Lots of form fields! Given that I have installed this as a Chrome app, shouldn't Prezi know something about who I am, and have some sort of access to my data? At best, signing up should be a one-click process (similar to purchasing an app in the first place) and at worst, couldn't it at least have an account already created for me and pre-populate some of the fields? It's unclear to me how much of this is possible with the current APIs, but this type of thing should be the default, expected behavior for anything installed as an application (and only applications that take advantage of the benefits of being an app should be featured in the store). Rapid, secure registration and payment are clear benefits to both users and developers of apps.

If I haven't installed Prezi as an app, Google should allow developers to easily incorporate the "Add to Chrome" button to their site, which would allow the site to then take advantage of easy registration and payment options. Imagine if, above all of those Prezi registration fields, there was a button:

A user could then choose between simply clicking this button, or filling out then entire form. I'd click the button every time for rapid, safe, and centralized payment and registration.

Finally, the store itself needs better curation. Browsing around the Games category, it seems half of the games are simply links to little Flash games surrounded by ads - hardly the slick HTML5 "apps" Google wants to promote. With a higher threshold for quality, and some improved discovery features, the store could quickly become a great way to find new services.

In conclusion, the Chrome store has great potential but needs to make changes to avoid becoming nothing more than a cool bookmarking service. Specifically:

I look forward to see how store adoption grows, and how this new take on the app concept plays into Google's larger strategy and offerings.

Like what you read? Join the newsletter and get updated when there's something new.