Refactoring for Testability: A Real World Example in Python/Django

My company, Grove Collaborative, is hiring full-stack engineers. If you like what you read here, and want to work on similar problems, email me ([email protected]) or learn more & apply.

At ePantry, we strive to have enough automated test coverage that we can deploy with confidence, without being dogmatic about our approach. We certainly aren't a TDD shop, and we don't have rules about code coverage metrics ("no commit can reduce code coverage!"), but it's very unusual that a non-cosmetic change makes it to production without some sort of test coverage.

But it wasn't a straightforward journey - our team didn't have much experience with "good" testing practices. In a few previous companies, tests if they were required at all, were viewed as a burden; "extra work" to tack on to your commit at the very end.

So building a culture around automated testing took time. To the extent we've succeeded, we did it by brute force: we just wrote the damn tests. After a couple of months of this and one by one, we built up enough actually internalize two key lessons:

But it took a bit of wandering through the testing wilderness to get there.

The other day at ePantry we refactored a bit of code for testability that I think provides a nice example of both the mechanics and the value of automated testing - something that I think can be tricky to understand from toy examples. The refactoring was simple, but yielded code that is easier to maintain, more composable, and (most importantly) allowed us to deploy a major feature with a high degree of confidence. 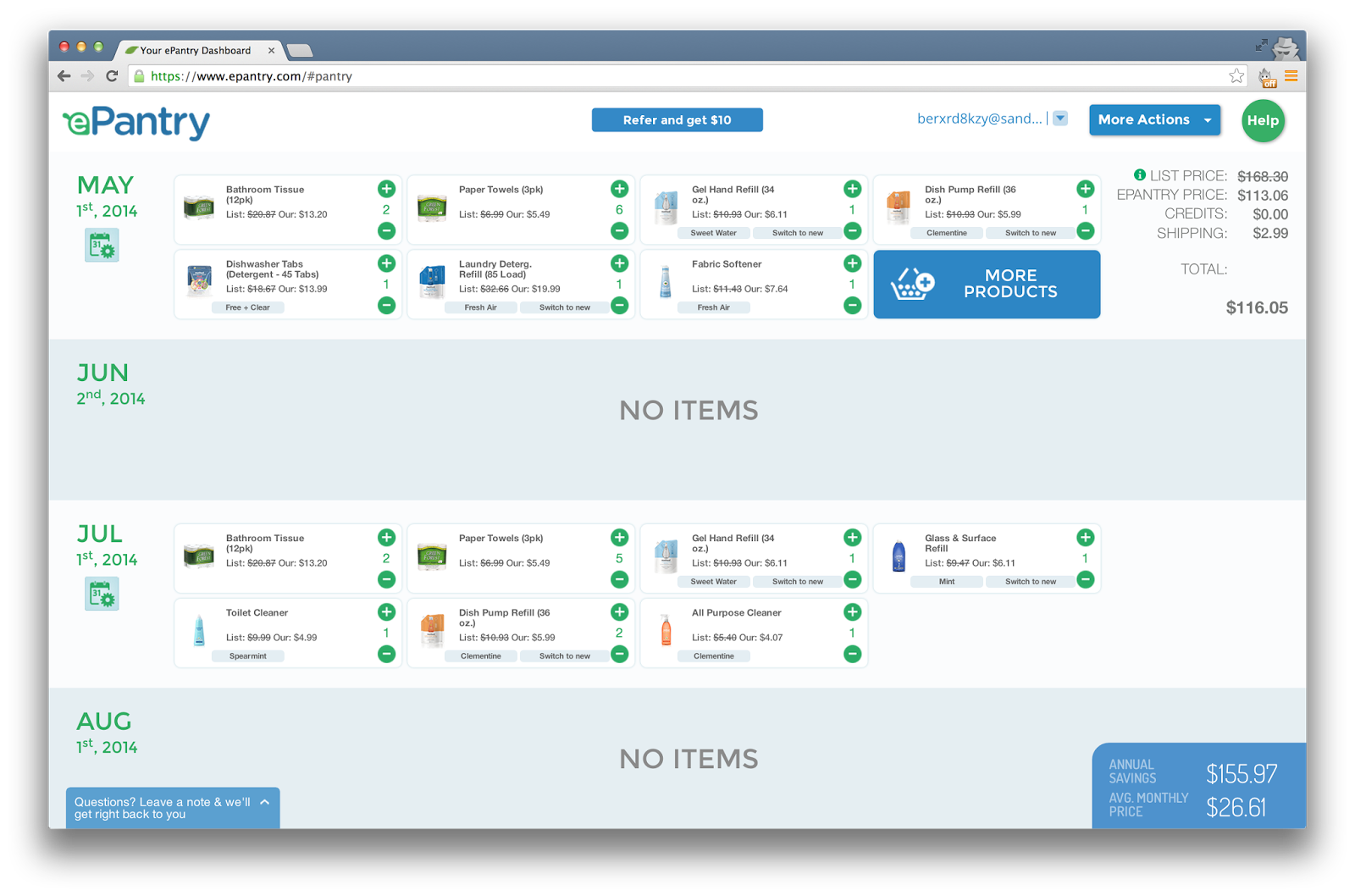 Over time, the household "consumes" those shipments and we need to generate more to keep the calendar populated with future shipments. We wrote a function that would run as an overnight chron job to "top up" the shipments of all of our customers so each customer always has at least a year of shipments on the calendar.

Below is a code snippet as it first appeared in our codebase, sans-tests. The code itself is simple, but it was a bit scary to deploy into production because it runs asynchronously, touches a lot of customers, and would not be easy to unwind if it ran amok. I've removed some bits of logging for clarity, but this is otherwise just as it appeared in the original commit.

Here's what it does:

Simple! But also untested and therefore scary. We tested it locally by cloning the production database and running the function through the Django shell. It seemed to work. But that's not good enough. This is too important and too complicated to be left to manual testing. So let's write some unit tests.

As is, this code is difficult to test. It's one big function doing a bunch of stuff and we can't test the components in isolation. If you look at the english language explanation of the code above, there are really three distinct steps, each of which can be separately verified. We can refactor to represent each of those three steps:

Piece of cake! Literally one line of code. We map our _create_until function onto the collection of customers without enough shipments. All the detail is in our three component functions (note that _create_until is just a recursive loop - it could certainly be implemented in a more imperative style of that's your thing).

We just need a handful of tests on these functions, and one good test on the high level function, and we gain a tremendous amount of confidence and robustness in the code. I glossed over it here, but I also discovered a few small bugs in our Django ORM query while writing the tests. Here are a few example tests, using Django's test framework and Factory Boy to create mock objects.

Ta-da! Of course there are plenty of other tests you could write, but just these four basic tests exercise the code reasonably well. And it would have been virtually impossible to get this level of testing fidelity with the original function. Plus, if one of these tests fails due to a later commit, we can immediately hone in on the cause. The refactoring and tests took less than an hour, and it will save me at least that much worry.

I hope you found this a useful, real world example of refactoring for testability. Love to hear any additional thoughts in the comments!

P.S. This code made it into production yesterday and ran successfully for the first time last night. Phew! Also -- you should sign up for ePantry and never run out of soap or toilet paper ever again.

Like what you read? Join the newsletter and get updated when there's something new.